No Widgets found in the Sidebar Alt!

No Widgets found in the Sidebar Alt!

From the back of Their Christmas Royal Wedding:

Cinderella takes the throne…
…and the hand of her Prince Charming?

While adjusting to her new life as heir to the throne of Casavalle, Gabriella meets a handsome stranger, with no idea he’s Prince Cesar of Aguilarez. A convenient marriage would unite their countries, but their attraction is anything but convenient!

Their Christmas Royal Wedding has all the ingredients I love in a royal romance. There’s the woman who didn’t know she was a royal. The meet-cute with a stranger, who turns out to be the heir to the throne of a neighbouring country. A very hot prince. A marriage of convenience. A beautiful castle. A ball with gorgeous gowns. It really ticked all my boxes.

I did really like most parts of Their Christmas Royal Wedding. The chemistry between Gabriella and Cesar is sizzling. I really felt for Gabriella, as she was so out of her depth in her new family. And the meet-cute was truly cute. I love mistaken-identity moments in books and this one was really lovely because Gabrielle was out of her depth and bared her soul to the man she thought was a stablehand.

The characters of Cesar and Gabriella were well-developed. Cesar was more than just a hot, brooding prince. Gabriella had quite a culture shock going from a small town in Canada to an obscure country in Europe, but she handled herself very well. What I also really liked about this book was that it didn’t use jealousy as a plot device. Women weren’t pitted against each other. In fact, Gabriella’s step-family treats her very well, which was a nice change from most books.

Unfortunately, Their Christmas Royal Wedding didn’t keep my attention. It was clear early on in the novel that Cesar and Gabriella had a lot of chemistry. They’re attracted to each other and they like each other’s company. Cesar helps Gabriella navigate court life and provides her with the necessary escape. They seem very well-matched. When Cesar suggests a marriage of convenience to Gabriella – to unite their countries – she is initially reluctant but understands the political reasons to do so. I understand her reluctance as one would expect to marry for love, not for political reasons.

Throughout their fake courtship – although, let’s face it, even before that – Cesar and Gabriella become attracted to each other. Which should be perfect, right? Here they are, having to marry because of their countries’ upheaval but at least they like each other and the marriage of convenience can turn into a real union of the hearts. Everything goes according to plan.

But no. If that was the case, Their Christmas Royal Wedding would be a very short book with no conflict. Marriage of convenience plots depend on the main characters to have a very compelling reason not to fall in love with the person they’re having to marry. And that was missing from this book. I never quite understood why Cesar refused his feelings for Gabriella. It had something to do with past girlfriends, maybe? And Gabriella’s reason for not falling in love with Cesar was even more obscure. I found it very hard to keep reading this book when the characters’ motivations were so obscure.

All in all, the book wasn’t bad. If you don’t mind weak motivations in the main characters, you’ll still like this book. I just found it hard to look past that, as I kept finding myself wanting to yell, “If you like each other, then there’s no problem!”

Welcome to my blog! I mainly review (romance) novels, but I’ll also occasionally blog about my own journey as a writer on the path to becoming published.

If you’re an author who wants to schedule a blog tour, please contact me. I’m always happy to help promote other authors. 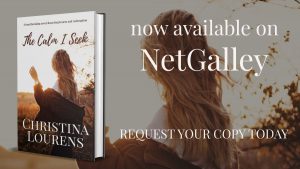 The Calm I Seek out 26 November